My brother Benny was out of the ‘service’ some little time before me and was working in Frascati’s, Oxford Street, but soon after I came out of the R.A.F he took a job as leader of the Blue Rockets, an ex-army band, and was doing work on the stage. That was my chance and he handed over his job to me and so I quickly got into action with Hal Tauber and his band. I did not stay long for I was offered a job with Rudy Rome and his quintet at the Albany Club, Saville Row, a place which in the future was to become the home of the famous Beatles. 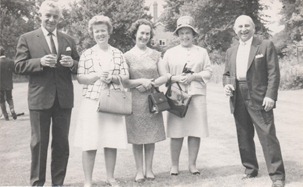 Rudy was the younger brother of Dave Rome, the band leader that had given me a job in 1929. Many of the clubs clientele were gamblers and often from my vantage point on the band stand I used to watch as piles of bank notes appear and disappear. I later learned they were simply betting on the registered number on the notes they were playing with. Ray Noble, the famous band leader who made good in America during the 50s and 60s when on a visit back to London (he was an Englishman) used to come to the club and sit in with the band.

The stars from Carousel and South Pacific stage shows often used to drop in. Whilst at the club we were allowed a free meal each night. One particular night, one of the band (no names no pack drill), was unhappy with the meal that was served up and duly threatened one of the chefs with a knife. The chef in turn said, ‘ok! So you want to play?’, ran back to the kitchen to get a long bladed knife and returned to our dining room to find that the musician had turned chicken, (excuse the pun), and had promptly fled into the night and we did not see him again until a couple of nights later.

Other jobs I did included, The Silver Slipper Club, Regent Street, working from 11pm to 4 or 5 o’clock in the morning. Fortunately the job only lasted about 6 weeks as it nearly killed me. It was run by a world famous lady, one of the Meyrick Sisters and this was the last one of them. So into the 1950s and unfortunately, I just can’t seem to be able to pin-point the dates accurately, but I don’t think it is terribly important.

So after a year or so with Rudy Rome I left and joined up with Harold Geller. I was with him at the Princess’s Restaurant, Piccadilly and later on we secured the job at Frascati’s, my second visit there. We did a few broadcasts from there, but after a time our broadcasts were done at the various B.B.C studios. One of our frequent guests at Frascati’s, was Petula Clark, then only about 12 years old, later on to become a television celebrity. 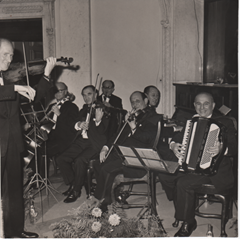 During one of the Harold Geller broadcasts, I was a featured soloist. He had composed a Samba entitled The Mocking Bird and we thought it might be a good idea if I played this tune on each of my instruments in turn. This was duly rehearsed and my part in that broadcast lasted 7 minutes.

On another of his early morning broadcasts I nearly turned up without my saxophone. I’ll tell you what happened.

In the early years after the war I did not have a car as living in Streatham where there are no tube lines, all my travel had to be done by bus. The broadcast in question took place in Aeolian Hall, Bond Street. My method of travel was to take the bus from Streatham to the Elephant & Castle and change at that point to the tube to Bond Street. I carried with me my saxophone, clarinet, flute and piano accordion. When I think about it now I wonder to myself and ask myself how on earth I managed it because as you can see there is not so very much of me. Well this particular morning I got as far as the Elephant & Castle OK and got of the bus with my instruments so I thought and nearly passed out when I realised that I had let my saxophone on the bus, which was now fast disappearing in the distance. Well I ask you what would you have done?

During my service career I earned myself the title king of the hitch-hikers and some wonderful stories I could tell you of these adventures. But to get back to my predicament, my past experience was brought to bear and without thought or hesitation I hailed and stopped a van, quickly explained my trouble and believe it or not this Good Samaritan let me into his van and we chased after the bus and caught it. I duly retrieved my sax and only just made the rehearsal on time.

After we were there for a few years, Frascati’s closed its door and another famous landmark had faded away. We also did a second stint with Rudy at the Albany Club (which was frequented by many leading stage and screen stars such as Tommy Trinder, Arthur Askey and Danny Kaye). We then went on to play at the Hunting Lodge which was equally famous.